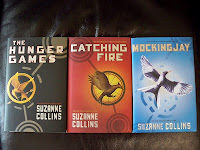 reading.  I continued reading them because the character development was very good.  I finished reading them because I was very curious to see what Suzanne Collins had in mind.  There are many books on my summer reading list for 2012 (list is included at the bottom) but it began with the new cult series, "The Hunger Games".  I reluctantly began reading this series because our 12 year old daughter asked if she could.  I generally shy away from pop culture and anything that smacks of a fad (especially when it comes to literature).  48 hours later our 15 year son had finished the first book and was looking for the second one.  I started reading the first five pages and then was not incredibly impressed.  My friend assured me it got better, my thought, it should have me at hello.  Faced with a trip to Florida and no time to go find a book I threw the Hunger Games in my backpack.  While sitting on a white sandy beach, looking into a crystal blue ocean I became captivated.  Maybe it was my religious upbringing, maybe it's my "Tea-Party" father, maybe it's my (according to my husband) critical nature.  But the entire time I was reading this book I kept thinking I can't believe they let HER publish this.  This book is an awesome political tool.  This book actually teaches kids that they have something to fight for, that family is important, that self is not the most noble, that when faced with adversity you can survive.  I was engrossed and yes, Mrs. Collins, you impressed me.  Not only was I impressed, I was ready to enter the arena.  Fortunately, our son had put his hands on the 2nd book, "Catching Fire", and had not yet returned it (Yes, Bennet you'll get it back).  The sequel was surprisingly good, it had twist and turns and a few givens but it did keep me reading and most importantly it kept me in the fight.  The third book, "Mockingjay", was not as well liked by our 15 year old.  I did love the way there were parts that kept you guessing and parts that kept you rooting, the ending was probably a little tame for a war-loving boy.  True literature buffs and English scholars I'm sure will and have and have had their say as to the significance of these books.  What I can say is they make you think.  They cause one to not settle for the status quo, they cause you to look around and ask, "Am I living in reality or just a lie?" For a believer of Christ I think they are a great reminder of the battle that we are fighting and will fight.  Do I think that all tweens and teens should read them?  Probably not.  There is the great premise of people thrown into a ring killing to  survive for the sake of entertainment.  I question if that same scenario doesn't play out everyday in our junior high and high schools.  As adults do we not look back on some of those years and wonder how we came out alive and possibly we would not have survived had it not been for our "sponsors".  I have yet to see the movie and after finishing the last book probably won't - I would like my version of the "Hunger Games" to continue to play in my head and not be contaminated by the Hollywood version.
If you find yourself with a little extra time this summer and you are struggling with a way to connect to your tween or teen - pick up a copy of the Hunger Games read it as a family, ask each other questions, find something you have in common.  And fight, fight for each other, fight for family, fight for beliefs and enjoy, enjoy life, enjoy each other, enjoy beliefs.

The rest of my summer reading: